In the divorce on demand regimes common today, we see many Jewish parents, more often than not Jewish fathers, being forcibly thrown out from their families, somewhat in the way of taking out the garbage. Jewish children are being intentionally alienated from their parents in many divorce cases. Destroying families unnecessarily and alienating children from their parents are not the ways of Hashem and Avraham Aveinu. The divorce regimes we see today are the cruel, unjust ways of Sodom and Gomorrah.

Rabbeinu Gershom in the middle ages established a Jewish law allowing both the husband and wife to refuse a divorce if they want to save the marriage. (see Shulchan Aruch, Even Hoezer 134, and elsewhere). Saving marriages is the proper approach for Torah Jews, not destroying marriages. The Torah forbids Jews from using non-Jewish courts if the other side is willing to go to Bais Din (see Shulchan Aruch, Choshen Mishpat 26). Lawyers or divorce activists who tell a husband or wife to arrest or expel their spouse commit a severe sin and cause major problems in resolving divorce disputes.  They have destroyed or damaged BOTH parent’s relationship with the children, and this wreaks real psychological and financial havoc on all involved.  No one benefits from these situations except the lawyers and divorce activists.

While many non-Jewish women seem to have rejected feminism, in contrast feminist groups today have significant power in various Jewish communities, including Orthodox communities. Feminist “justice” in too many cases is not the ways of Hashem and is not the ways of Avraham Aveinu. The voices of Jewish men are seldom heard, while too many rabbis rush to ingratiate themselves with feminist groups. There is no question that women are sometimes victimized in divorce proceedings. Women victims of true injustice, along with male victims of true injustice (ie injustice according to Torah law), deserve support. Even so, currently there seems to be a definite inbalance of power in favor of women, in both the Jewish and non-Jewish world.

Its high time for all Jews, especially Jews who claim to follow Hashem’s Torah, to remember that we were choosen by Hashem to embrace the ways of tsedaka u’mishpat, and to reject the ideologies and practices of Sodom and Gomorrah. 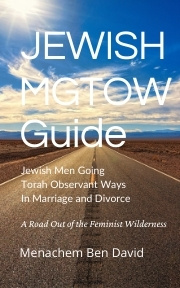